This calculates the temperature correction factor for NGL and LPG’s. This can then be used to obtain a density at standard or line conditions.

This option is used to select the standard temperature which the liquid is to be referred against.

This option used to select whether the density the user wishes to solve for is the line or standard density.

This option is used to decide upon the rounding procedure to be employed. The full precision calculation doesn’t round any values. Full rounding rounds the inputs and outputs as described in the standard. Rounding of inputs only rounds only the input temperature and density according to the procedure set out in the standard. Note that the range of the density inputs at standard conditions vary from one standard temperature to another. Consult the standard for details of the range of the input parameters of the calculation. Inputs that do not meet the criteria described will output NaN as a result.

If 60°F is selected as standard temperature, i.e Table 23E or 24E is being employed, there will be the option to enter the liquid density as a relative density.

If the options for 60°F standard temperature, to solve for standard density and to enter a relative density are selected an option to apply a hydrometer correction will become available. This only needs to be selected if a glass hydrometer was used obtain the relative density value so as to correct for the expansion/contraction of the glass. 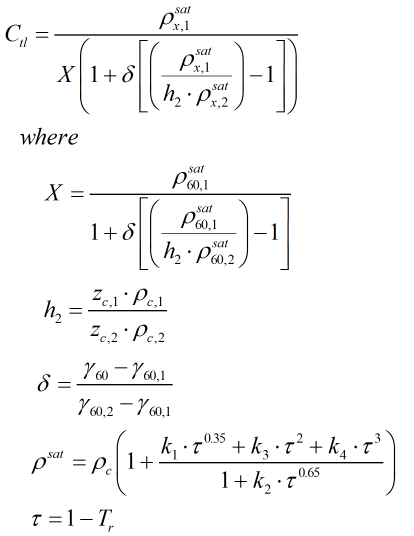 Density is calculated from the relationship:

The hydrometer correction for relative densities measured with a glass hydrometer is as follows: